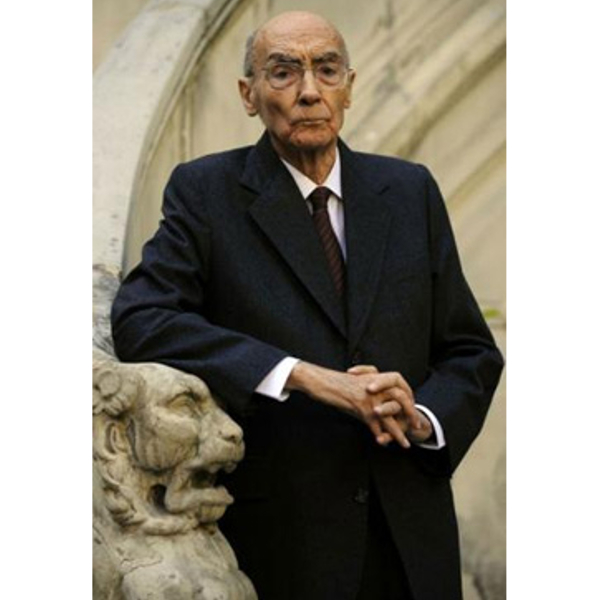 José de Sousa Saramago, GColSE (Portuguese: [ʒuˈzɛ ðɨ ˈsozɐ sɐɾɐˈmaɣu]; 16 November 1922 – 18 June 2010), was a Portuguese writer and recipient of the 1998 Nobel Prize in Literature. His works, some of which can be seen as allegories, commonly present subversive perspectives on historic events, emphasizing the theopoetic human factor. In 2003 Harold Bloom described Saramago as "the most gifted novelist alive in the world today" and in 2010 said he considers Saramago to be "a permanent part of the Western canon", while James Wood praises "the distinctive tone to his fiction because he narrates his novels as if he were someone both wise and ignorant."

More than two million copies of Saramago's books have been sold in Portugal alone and his work has been translated into 25 languages. A proponent of libertarian communism, Saramago criticized institutions such as the Catholic Church, the European Union and the International Monetary Fund. An atheist, he defended love as an instrument to improve the human condition. In 1992, the Government of Portugal under Prime Minister Aníbal Cavaco Silva ordered the removal of The Gospel According to Jesus Christ from the Aristeion Prize's shortlist, claiming the work was religiously offensive. Disheartened by this political censorship of his work, Saramago went into exile on the Spanish island of Lanzarote, upon which he resided until his death in 2010.


Saramago was a founding member of the National Front for the Defense of Culture in Lisbon in 1992, and co-founder with Orhan Pamuk, of the European Writers' Parliament (EWP).